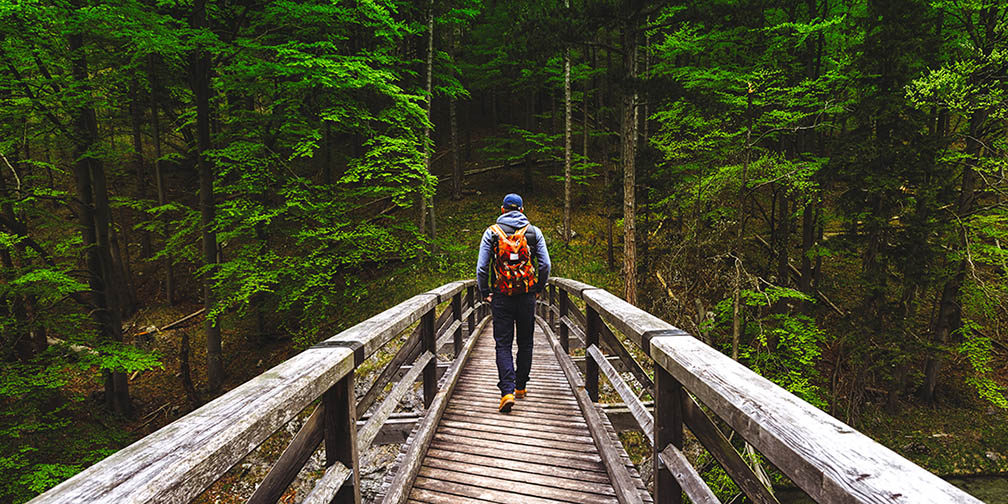 Every state has all new sights to see and all sorts of new things to do. For instance, in this top ten lineup you have two states that share a massive national park where you can almost feel the earth bubbling underneath. Another on this list has world-famous ski resorts where you can catch fresh snow and maybe even rub elbows with celebrities. And another is home to a city built on chocolate (not literally), and it's appropriately referred to as "The Sweetest Place on Earth."

Every bit of countryside in these states, too, if you drive far enough, has new scenery and new smells, new sounds and new sights all set to liven up your senses - rarin' to give you a jolt. That’s a good thing, too. You give up a little bit of yourself to be a big bit of everything else in these wide open spaces - just in a different way than in the city. You’re a little less on high alert and a little more present. You're more aware of being yourself, unabashedly. It’s a reset and everyone deserves one once in a while.

You're sure to find plenty of both city and countryside in the following top 10. You're also sure to find lots of physician opportunities within these states. This new year, take time to experience somewhere new. Here's part one of our two-part top 10 list.

Montana isn't a place you visit; Montana is a place you experience. It’s a dream of a state where alpine peaks meet rolling prairies and an orb-stretching sky swallows you whole. The Great Plains (America’s version of the Serengeti) start here. Yellowstone and Glacier stretch their mountainous backs across boundaries. And 16 ski areas and 54 state parks keep the tourists coming.

This state is about big adventure more than anything: the American West at its finest. The kind of place Ken Burns could live out his fantasies. It’s not all grit and galloping horses; it has a chic side, too. Spend an entire day in Billings, Missoula or Great Falls and come out a more sophisticated citizen of the world. Museums, art galleries, festivals, farmers’ markets, wineries, rustic restaurants…these cities have all that. Plus, the entire state ranks high for breweries per capita (over 40 and growing). Stop in for big sky and a brew. You won’t regret it.

#9: Kentucky - It ain't all bluegrass and horses here

Think Kentucky and we bet a lot of things come to mind: bluegrass music, bourbon, baseball bats and barbecue to name a few. (Don't forget the famous Derby, either.) This state is most certainly a travel heavyweight because of all that, but it ain't all bluegrass and thoroughbreds here. For instance, Abraham Lincoln’s tales are told on historic trails and Muhammad Ali’s fights are emblazoned in eponymous museums. Plus, there's a whole countryside ripe for exploring.

It’s not hard to paint a pretty picture of Kentucky. It’s got four beautiful seasons awash with color, and a myriad of caves, lakes, and mountains. You're a short drive away from everything. Come hike otherworldly sandstone formations in the Garden of the Gods; walk Louisville's version of a pub crawl on the "Urban Bourbon" trail; and spelunk in the state's famed cave country. Yep, the state houses the best of the untamed outdoors (including, but not limited to: Daniel Boone National Forest and Cumberland Falls State Park).

Some more things to do: you can follow in the paths of bootleggers and moonshiners on driving tours. You can plan an itinerary of eerie graveyards and forgotten wards or take to dark jazz clubs, historic neighborhoods or all of those thin, wiggly lines on the map that represent the rural byways of this adventure land. Or just content yourself with sitting on a porch and sipping mint juleps. Believe us, you've stumbled upon a veritable goldmine in Kentucky. The locals are proud to call this land home; when you get here you'll see why.

If the rest of the country knew how legendary every last spoil is in Colorado, everyone would move here. This state boasts 300 or so annual days of sunshine, famous landmarks galore, the too-tall mountains of Rocky Mountain National Park and more culture in every last city than the local farmer's butter.

Take Denver (and surrounds) for example. Its live-music, couture-clothing-shop, art-gallery and nightlife scene are all super-sized. Not to mention there's top-notch food and brew on every corner. All the above and more makes the Mile High City's downtown atmosphere second to none.

If you want to get away from the hustle, that's easily done. Head two hours or so west to Vail and you'll be on America's longest ski run. Go a little farther southwest to Aspen and you'll get more than powder. You'll get a mountain town filled with music festivals, plus an interesting mishmash of Hollywood elite and tough cowboys piling in and out, rubbing elbows at cafes and in hot tubs.

Camp out in Colorado Springs for a while and frequent the famous Garden of the Gods park (not to be confused with Kentucky's park of the same name). Or take a little road trip to Pikes Peak and day-hike this Rocky Mountain "fourteener." More national parks and wondrous ski towns make up the rest of the state for some of the best adventuring, relaxing, skiing and hiking in the country. We know you've been itching for a reason to head to the Rocky Mountain State. Who could blame you? Plan your city getaway or mountain escape to Colorado today.

Have a real-deal Western experience in Idaho. How? Easy. This state gives you pure nature (Sawtooth National Forest); it feeds your mind with local art and culture (The Basque Block); and most of all it brings you outdoor adventure (Sun Valley Resort)—no matter which way you turn.

Come to think of it, adventure was born in Idaho. Pioneers, mountain men and fur traders journeyed on the famed Oregon Trail here. And today, outdoorsmen carve iceholes and slopes on endless turquoise-blue lakes and on over 80 ski runs in the Yellowstone Teton Territory. And the rest of us enjoy the bubbling hot springs, legendary caves, ancient volcanoes, melted glaciers and endless backcountry that complete the Gem State (aptly named for its abundance of natural resources).

Sure, we could go on about all the lakes, forests and mountains that make up Idaho but all the adjectives in the world wouldn't give them due justice and it would only take time away from you learning about all the opportunities to work here. Don’t wait. Come enjoy the scenic byways (Northwest Passage) and resort towns (Coeur d'Alene), plus every other slice of paradise Idaho has to offer.

Those of you who haven't had the opportunity to explore the lively world of Pennsylvania, that's unfortunate. It's East Coast living at its finest. The food's phenomenal. The music and art scenes are expanding like crazy. And the cities are as historic and raucous as it gets.

Take Philadelphia for example. For all its nation-birthing prowess, there's more to the City of Brotherly Love than Independence Hall and the Liberty Bell. It’s a city that just emanates good times. Stop by the Fringe Arts Festival for some drama; head to a Phillies game for some fun; then take a restaurant tour along famous East Passyunk Avenue for some fare.

Northcentral Pennsylvania is just as beautiful only a bit more sprawling. There are parts throughout the Wilds (as this region is otherwise known) that look exactly like old black-and-white photographs. White pines and oaks stand tall in Cook Forest. Stars flit and sparkle like nowhere else in Cherry Springs State Park. And local pubs like Straub Brewery pour all-natural blends that have little changed in over 100 years.

Just west of the Wilds is the Great Lakes Region. Google this portion and you're in for a sight. Shipping ports and grand architecture will make up most of the images you'll see. The rest will be breathtaking shots of the Erie National Wildlife Refuge and stunning pictures of the lighthouses at Presque Isle State Park.

Head south and you’re in Pittsburgh (voted "Top Ten Most Beautiful Places in America” by USA Weekend). During antebellum years you might've encountered local residents helping slaves escape the South via the Underground Railroad. Back east in Dutch Country the landscape will make your jaw drop. This region is home to Hershey which has two of our favorite things: rollercoasters and chocolate. It’s also home to famous shoofly pie (irresistibly sweet molasses pie), true-blue farmers’ markets, the Civil War Museum, and Hunters Valley Wineries.

Be sure to read part two of our Top 10 states for locum tenens doctors to explore in 2016 list. Also, feel free to see what opportunities are available now.