Locum off the grid: Find yourself in Alaska’s famed Inside Passage

Most people see Alaska for the first time from the deck of a cruise ship. It’s an indescribable sight, but for those of you who want to see at least some of Alaska’s 33,904 miles of coast without a ship rail between you and the Last Frontier (and for those of you who prefer seeing animals in the wild, not shaped out of towels on your bed), we have a locum spot for you in one of the towns and villages that dot the southeastern portion of the state.

Known as Alaska’s Inside Passage, this area was carved by the staggering force of massive glaciers millions
of years ago, and still boasts wildlife-filled fjords and lush island scenery. Its mountains are carpeted with Hemlock forests and giant Sitka Spruce. Its mild, maritime clime makes the area a prime habitat for bald eagles, sea lions, porpoises and whales. And its rich history is home to Tlingit, Haida and Tsimshian Indians, which you’ll see reflected in towering totem poles. 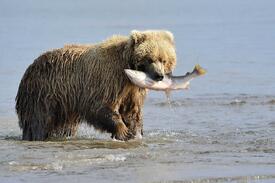 Due to the extremely rugged, mountainous nature of the famed Inside Passage, however, very few of the communities have road connections outside of their locale, so aircraft and boats are the major means of transport (some of the bigger towns are served by Alaska Airlines from Juneau or Anchorage, but “bigger”
is a relative term here). And while the Inside Passage is a popular route for cruise ships, there are still
portions where civilization only exists on the fringes of the backcountry. If you ever watch the Travel Channel, you’ve probably seen Steven Rinella, who goes "off the grid" in Alaska, battling weather and treacherous terrain in pursuit of fish and wild game to stock his freezer in Brooklyn. You don’t have to go to such extremes.

Pop quiz: what national scenic byway is much more than a road?

The Alaska Marine Highway System or AMHA. It includes the Aleutian Island ferry system - which was recently named one of the Most Scenic Ferry Rides in the U.S. - and it's invaluable for traversing the Inside Passage.

While you won’t find chandeliers, five-star cuisine or an all-night disco, you will find clean, comfortable cabins
(if you want to stay overnight). Nor will you feel like chattel on a car barge. Alaskan ferries have great observation lounges, nice restaurants, a gift shop, internet connections, lounges, spacious decks and even naturalist programs. Put a tux and tie on and someone will likely throw you overboard.

The ferries cover 3,500 miles of Alaska coastline and the 150-mile voyage across the Inside Passage from Juneau to Sitka is simply extraordinary. Grab a spot in an onboard cabin or pitch a tent on the ferry's roof. The ship's outdoor heated solarium lets you bask in the views while fending off cold winds; indoors, the ship's cafeteria serves local salmon and beer brewed in Alaska.

If you want to schedule a trip anywhere on the Alaskan Ferry, you can call an agent and they’ll book everything—for free. Agents are employees of the state, so you simply pay the scheduled fare. Oh, and because they’re employees of the state of Alaska, they know their stuff. They’ll recommend towns, attractions, lodging, etc.
You’ll avoid the human floods of cruise ship tourists and see what you really came to see: “wild” Alaska. Foxes, wolves, caribou, moose, harbor seals...and when we tell you you’ll see wildlife, we don’t mean you’ll see one
of each—we mean you’ll see hundreds.

While you locum in Alaska, take in some orcas on a kayaking excursion, mush some sled dogs, go glacier trekking from a helicopter, hike boardwalk trails, go fishing in streams or charter a boat for salmon and halibut, cruise the magnificent Kenai Fjords, head to a sandy beach for some coming or just take a load off at a remote cabin. We dare you.