In Tasmania you won't run away from your problems, you'll bike. 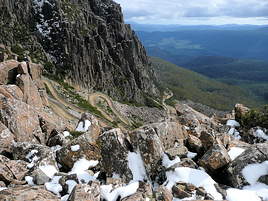 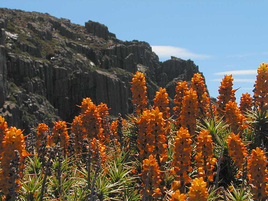 Tasmania. Mountain bikers have kept quiet about the outstanding trails here, but on an island crawling with outdoor adventurers a secret like this is tough to keep quiet.

The characteristic dolerite columns so prized by rock-climbers and rapellers (abseilers) are especially dramatic here. Wildflowers abound in summer, and despite the stony plateaus there are also dense forests and moorlands that make most of us think of, say, Scotland. Mention Tasmania and most people think of skiing. Yet Ben Lomond National Park, which encompasses the Mountain Range of the same name, offers a challenge for anyone who loves pedal power. It’s called Jacob’s Ladder.

Aptly named after the ladder to heaven described in the Book of Genesis, this steep and narrow zigzag road ascends to heaven, or at least 5148 feet/1570 meters in the air. The hairpin bends of the road and the sweeping views also make it a biker's heaven on earth. Jacob’s Ladder also happens to be the final section of the ascent to Ben Lomond—the only route to the ski fields. 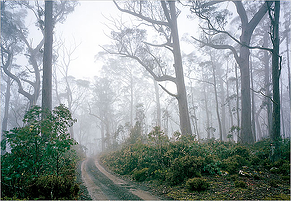 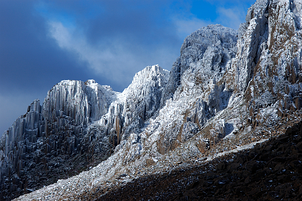 Riders start near the summit then cruise down sweeping fire-trail switchbacks before hitting the main trail down.
One devotee, Andrew Harris, describes the ride this way: “Fist-sized rocks, lung busting ascents and hope-and-pray descents combine with vast vistas and temperamental weather for an unprecedented outdoor experience.” Once you’ve descended Jacob’s Ladder, there are some tough secondary access trails and sculpted single-tracks that are worth the trip, too.

This spectacular ride is less than an hour from Launceston, Tasmania’s second largest town with—not coincidentally—one of the highest per-capita densities of bike shops in Australia. Buy or “hire” a bike at Mountain Bike Tasmania (MBT) where a guide can tailor any ride to your skill level. Dirt fiends here also recommend Kate Reed Nature Recreation Reserve. Wedged between the Midland and Bass highways, there’s no set route to follow, but it’s difficult to get lost; just go where you please along the trails and fire roads. 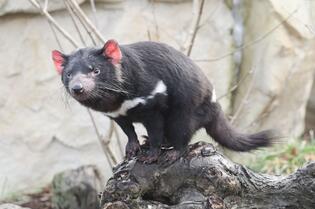 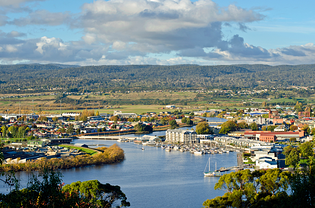 When you’re biking (or driving or skiing) here, gear should be windproof and rainproof—the weather can change rapidly in any season. In fact, pedaling in the snow is a common sight and chains are required on vehicles. One resolute rider says, “I enjoy the cool weather: it’s easier to see the incredible views if you’re not drowning in sweat!”

Rapha Performance Roadwear recently released a short film of a bike journey across Tasmania called Van Diemen's Land (the name Europeans originally used for Tasmania). Filmed with a cast of local riders over three days, it showcases the breathtaking countryside and amazing cycling roads the Apple Isle (yet another nickname for Tasmania) has to offer. For the full effect, take a journey down Jacob’s Ladder now with a rider who filmed the trip wearing IMGing HD 720 Video Camera Sunglasses. Hint: don’t eat lunch first.