The U.S. is a beautiful, electrified land: east to west, too-tall mountains storm onto too-long plains and then disappear into too-big coast. Each state is respectively remarkable. (They all have their own landscape, their own character, even their own energy.) Part one of Global Medical’s two-part "Top 10 States to Explore" series highlights some of the most remarkable states in the union. Read on and be inspired.

#10 Virginia: America's beautiful battleground and gateway to the South

Powerful Native American nations lived off the land now known as Virginia for centuries. English settlers then came and established their first permanent colony in 1607 giving birth to a new way of life in the New World.

You could say Virginia is old—because it is. Its age shows even in its nicknames (e.g., Old Dominion and the Mother of States). It’s not ashamed though. This state is proud to show its hard-fought scars. It’s been a battleground for many violent paradigm shifts throughout American history (think the Revolutionary War and the Civil Rights movement). So we look to VA and what we find wrapped up in its 42,774.2 square miles is an abundance of wisdom, beauty and character.

On the state's eastern coast you can bet there are a slew of great places to explore. Like Ferry Farm—on the banks of the gorgeous Rappahannock River—where you can visit the house George Washington grew up in. Or take to the Grapes and Grains Trail: you'll come across four wineries, a brewery, a distillery and tons of jaw-dropping scenery along the way. Oh, and if you run out of things to do (which you won't), Washington D.C. isn’t far off. 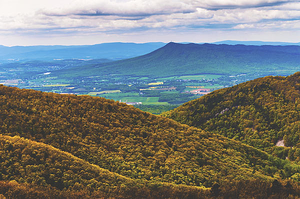 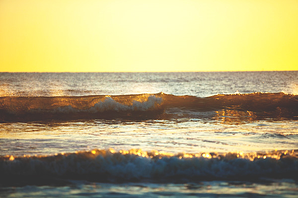 Farther in-state you can road-trip on the Blue Ridge Parkway; kayak the Upper James River; drink and dance at the Blue Ridge Blues and BBQ festival; or cruise into the famous orange-hued Virginia sunset on Smith Mountain Lake. There's Shenandoah National Park, too, with 196,000 acres of trails, caves and rivers.

Life moves pretty fast. It's important to slow down and take a deep breath every once in a while. Luckily that's not hard to do in Virginia. Come breathe in rich colonial towns (think Jamestowne), golden mountain communities (think Roanoke), silvery coastal cities (think Virginia Beach) and the most happening capital city in the South (Richmond). Take time to experience everything the Mother of States has to offer.

Try as you might you won't find another place like Oregon. In the south of the state there's this incredibly blue body of water high up on a mountaintop: It's called Crater Lake and it's the deepest lake in the United States. Make it to the top and you've got 2,000-foot-high views with nothing but infinite old-growth forest and rivers in every direction. Oh, and have you ever heard of a cliff-top lighthouse called Heceta Head? No? Drive north along the coast to catch it. Whale watching is probably at its finest here.

Keep heading north for a while and you'll start seeing massive rocks jutting out of the ocean at Cannon Beach. This place is much more than mist and monoliths though, it also doubles as an artistic town. Change course east with a slight southward bent and you'll arrive at Multnomah Falls—a grand waterfall that fringes the Historic Columbia River Highway. Then there's Mount Hood southeast of that (Portland's eye candy and Oregon's resort hotspot), Smith Rock southeast of that (a towering rock notorious to climbers everywhere), and the Painted Hills a tad east of that (a sea of multi-colored mountains). Make sure you check out all of Oregon's wonders.

Next to all these peaks and waterfalls and lighthouses you'll find farmers' markets, wineries and breweries with the freshest produce, the choicest of Pinot Noir and the frothiest of ales. And these places are only a few short hours from awesome cities and towns. 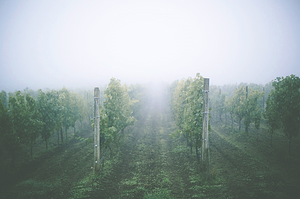 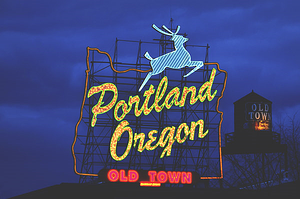 What about Portland? How can we forget the Rose City (named for its three stunning rose gardens plus the Annual Rose Festival)? The city that's been described as America's most European? The city that comes to mind whenever you think Oregon? If a pretty magazine is your only source for choosing travel destinations, you probably won't visit this riverside city. Because as gorgeous as it is, as cultured as it is, as downright everything-you’ve-ever-wanted-in-a-city as it is, you won’t find it bookmarked in some glossy brochure: you’ll hear about it from outdoorsmen, foodies, artists, explorers of all types, and now us. Here's a litany of things to do in Portland.

#8 Florida: There's no getting away with being uninspired in this inspiring land

Break your routine and try something new. Try Florida. A place with ineffable beaches and bogs; with waves that flit and sparkle; and with cities that dance and shine. Keep in mind, blue skies and pristine beaches are just the beginning of what makes the Sunshine State a can't-miss.

Northern Florida, for example, is replete with diversity. What with its oak-canopied Tallahassee, its raucous-nightlife-having Panama City, its river-city-by-the-sea Jacksonville, its food-with-a-Cajun-flair Gainesville, and its relax-in-the-morning-surf-in-the-afternoon Pensacola—there's no getting away with being uninspired in this inspiring land.

Jump way southeast and you’re in the thick of striking scenery—Port St. Lucie. Residents and tourists have long referred to this stretch of Florida as the Treasure Coast. Spend any time here and you'll agree the name is fitting. The waters offer up awe-inspiring marine life and a fishing scene second to none. Back on dry land, you'll find beachside boardwalks and farmers' markets galore. And with over 250 days of sunshine each year, how could you not treasure a place like this? 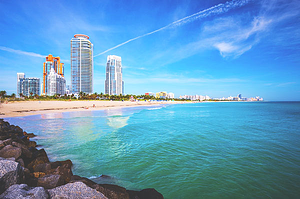 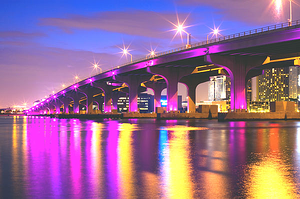 Farther south you'll find a sparkling city. It doesn't matter where you grew up, you've heard of Miami. In fact, you probably have an indelible composition of the city's colors in your head: green, blue, gold and every imaginable shade between. You'd be right to conjure that up. But if you go beyond the pretty images, you'll see a city with colors that don't register on any spectrum. We won't fault you for being blissfully unaware. Come see all the colorful music, dance, theatre, film, art and nightlife going on behind the scenes.

It's not too often you can say a single place has it all. It turns out that's exactly what we found in Florida. Everything.

#7 Massachusetts: Imbibe in a state made of greatness

Massachusetts is great for so many reasons. Let’s start with reason number one, Boston. Four centuries of iron-hearted American history radiate through this town. It’s a proud city and it shows everywhere. It's not called the Cradle of Liberty…the Athens of America…the Hub of the Universe for no reason. It’s because cultural and political revolutions were born here. It’s because colonial and cutting-edge architecture is housed here. It’s because cream-of-the-crop colleges and universities drive the world ever-forward. It’s because top-notch seafood is served, sports history is made, avant-garde art and music is created, and the most epic showing of Independence Day is echoed across New England.

Southeast of the Hub you’ll find Cape Cod and the Islands (AKA reason number two Massachusetts is great). You get all kinds of culture, adventure and cuisine here. It’s all at your beck and call, too. Take a daytrip to Martha's Vineyard or Nantucket; try a fried-oyster slider at a top-notch seaside restaurant; or whale-watch on a speedy catamaran. Blue skies are known to stretch for miles in summer. And amazing surf notoriously pounds the white sand and snow in winter. This portion of the state is stunning in every season. 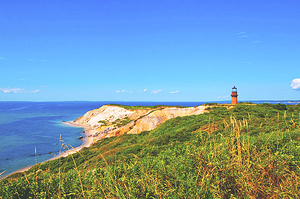 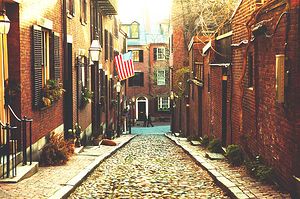 Come to Central and Western Massachusetts and you’ll find another reason this state is so great. In fact, you’ll roll around in greatness here. There’s perhaps the perfect amount of vineyards. And where there isn’t a winery there’s a historic town beautifully boxed in by farmland. Some notables: the Berkshires with bed-and-breakfasts and spa retreats, the Mohawk Trail with 63 miles of heritage and hiking, and Old Sturbridge Village with country stores, water-powered mills, and blacksmiths all showing you what life was like in the 19th century.

What are you waiting for? All of Massachusetts is glorious. Come pay homage to opulence in Cape Cod or honor history at the Freedom Trail in Boston (2.5 miles of epic American history). Come visit the Salem Witch Museum or eat your way through the North of Boston Seafood Trail; relive the “shot heard ‘round the world” in Lexington and Concord, relax near the craggy coastline of the North Shore. No matter what, you’re bound to have a good time. It’s family-friendly. It’s high-energy. It’s down-to-earth. And it’s all here.

#6 California: For those with an appetite for everything

Remember when you first saw the ocean? It was bigger than you could’ve imagined. California stirs the very same sentiment. There’s nothing like standing at Half Moon Bay at full morning mist, or catching the energy of Yosemite as the moon rolls into the forest, or getting drenched by sun and crystal-clear waters at Lake Tahoe, or even climbing toward the sky on the 90-year-old Giant Dipper rollercoaster in Santa Cruz. California is full of sights to make you feel small again.

Every traveler with an all-encompassing appetite should consider this state. It has coast. It has mountains. It has amusement parks. It has giant cities known the world over. Robust art scenes dominate in San Francisco and San Diego. Los Angeles’ culinary legacy continues to grow. And the scenes that authors and artists past painted of Big Sur still exist. 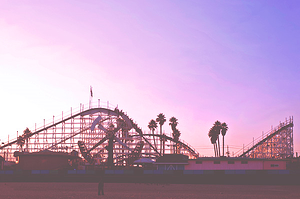 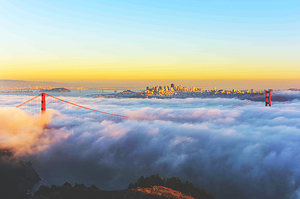 There’s nary a soul who doesn’t know about the power of California: its Hollywood streets, its golden beaches, and its poeticized tracts of land. The Redwoods stand tall. The wineries smooth over. The waves break. California is brilliant.

If you want to see all the above and more in one fast-paced adventure, then drive down coastal Highway 1. It’s a must to head down this stretch of California. In fact, go out of your way to make this happen. Why? Well, let us paint the picture. There are endless streams of clouds covering the sea. Underneath those big whites are cliffs and bridges and mountains and beaches. And while you’re barreling down that quintessential highway, those very same clouds roll far below you making it look like you’re on top of the world. Believe us, other motorists are just as mesmerized.

Stay tuned for our next blog to see which states made the rest of the lineup!