Ningaloo: where the earth is red, the water is blue & gentle giants roam freely 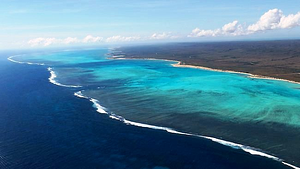 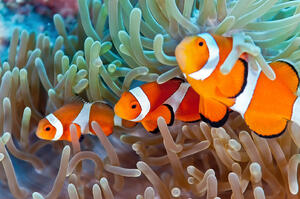 Ningaloo is the home of giants. These nutrient-rich, radiant blue waters off the coast of Western Australia play host to the world's largest fish — whale sharks — who return each year to gorge on plankton (and swim with humans). Pods of orcas here stalk humpback whales as they pass. Black marlin cruise the currents. Tiger sharks roam the deep. And that’s just the tip of the coral. Last June, the World Heritage Committee inscribed Australia’s Ningaloo Coast as an official World Heritage Site and it’s absolutely deserving of a spot on your bucket list.

The pristine Ningaloo Coast supports Ningaloo Reef—one of the longest near-shore reefs in the world. Its plethora of otherworldly underground caves and rock formations stretch for miles, and while the coral of its "sister" reef (Great Barrier) is 90 minutes out to sea, the coral at Ningaloo starts right on shore. 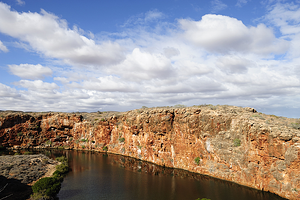 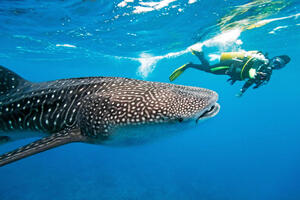 Step off the beach at Exmouth or Coral Bay, the area's two lovely towns, and get next to clownfish bathing
in anemone tentacles, lionfish, moray eels and hundreds of other tropical fish. Snorkel through coral lagoons and gardens in the calm bay and meet graceful manta rays, dolphins and other brightly colored fish. Or jump on a
glass-bottom boat and gaze at sea creatures at the Bundegi Bombies reef sanctuary. The shallow waters here are
perfect for entry-level divers and snorkelers.

Avid scuba divers the world over are divided into two groups: Those who want to visit Ningaloo and those who want to go back. They say Ningaloo is one of the few places in the world where you can visit and dive the exact same site three dives in a row and see something different every time. For really spectacular reef diving, head to Lighthouse Bay or the "deserted" Muiron Islands. Or discover the diverse collection of large sponges, gorgonians and sea whips in the sponge gardens at the entrance to the Exmouth Gulf. 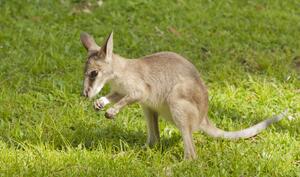 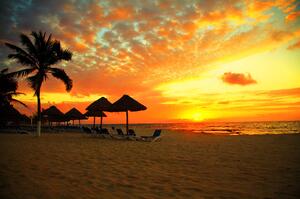 Back on dry land head to Cape Range National Park, where spectacular gorges carved by ancient rivers meet Ningaloo’s coral reefs, blue seas and sandy beaches. Walk to Yardie Creek for the wildflowers and rare black-footed wallabies that crouch on the steep walls. Then follow the walking trail through Mandu Mandu Gorge that ends with panoramic (and breakthtaking) ocean views.

We warn you: there are no five-star hotels or night clubs here in Ningaloo and people are outnumbered by marine and wildlife. But you can have a "yarn" with the locals over a beer at the tavern, join an eco safari, learn to surf, or just "be" with some sea turtles. Take a dive now with the graceful, gentle giants that call Ningaloo home.