The kea: the cheeky bird New Zealanders love to hate 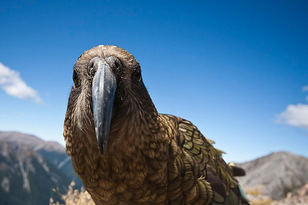 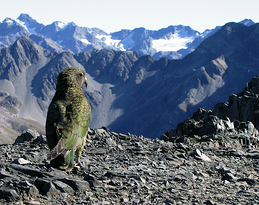 Meet the parrot that’s as smart as a monkey: New Zealand’s own kea. Dubbed the Clown of the Alps, this bird is heralded as the world’s most intelligent bird. It’s also heralded as the cheekiest. A permanent resident of New Zealand’s mountains (and the world's only alpine parrot), the kea is one of the few large birds in the Land of the Long White Cloud that hasn’t forgotten how to fly. Catch a glimpse of a kea in flight and you won’t forget it, either: the bird transforms from sleek olive-green to brilliant flashes of bright orange, scarlet and yellow.

Insatiably curious, charismatic, and mischievous, keas are also hardy; they can tolerate a range of temperatures, and they thrive on everything from berries, leaves, fruits, and nectar to insects, roots, and carrion (yes, dead animals). They’ve also been known to scavenge for food in human trash receptacles. In fact, keas are famous
(or infamous) on South Island ski fields and tramping tracks where they’re often described as bold, reckless and often downright destructive 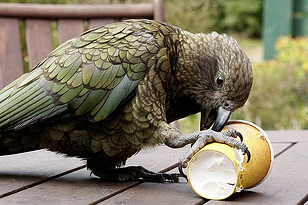 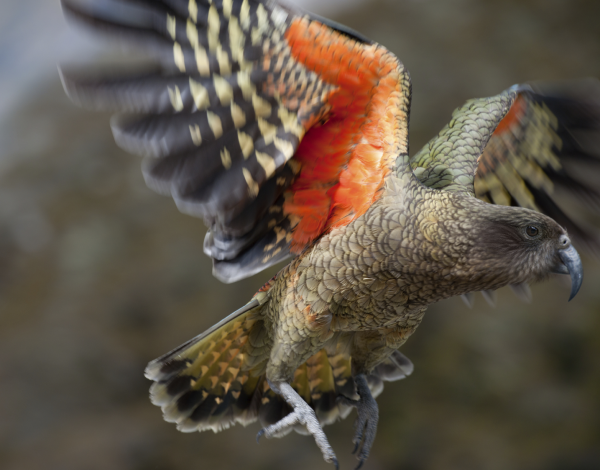 Keas tend to loiter around alpine picnic sites and car parks partly because it’s an easy source of junk food—and partly because it’s where they can get up to the most mischief. Young keas, in particular, are natural sleuths; they're curious and will take a crack at any new plaything. Residents and tourists alike tell tales of the notorious birds hanging out on the roof and "bonnet" (hood) of their cars. Keas will tug and pull at the “aerial” (antenna), attempt to peel off rubber door seals and chew through wiper blades (did we mention keas are particularly fond of rubber?). Keas have even been known to rummage in people’s bags! 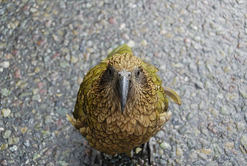 f the world’s most unusual theft stories—a British tourist had his passport stolen by a kea! The traveler’s passport was stored in a brightly-colored bag in the luggage compartment of a bus heading to Milford Sound in the Fiordland region of New Zealand. The kea struck when the bus stopped and the driver was busy in the luggage compartment; when the driver turned around the startled kea flew away with the passport. "The thief was described as 1-ft high with feathers and a rather mischievous disposition," reported the UK Daily Mail. "The bird was last seen heading into thick forest and the British passport's owner doesn't expect to get it back." The tourist said, "My passport is somewhere out there in Fiordland. The kea's probably using it for fraudulent claims or something.”

Alas, insatiable curiosity—and a love for high-fat food—very nearly killed the kea off. It’s now a protected species, but because the kea was spotted attacking the occasional live sheep some years ago, it was dubbed a killer and tens of thousands were killed for a bounty that was put on the little green heads. 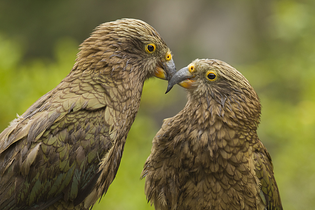 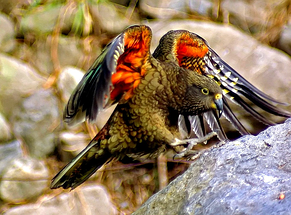 Inarguably, humans play a significant role in the population of kea birds. Now listed as a nationally endangered species, the status of the wild kea population remains unclear though estimates put birds in the wild somewhere between 1,000 and 5,000. Author Douglas Adams once said that wildlife of New Zealand can be divided into three main categories: endangered, odd, and sheep! Indeed, there are 10 times as many sheep as people. Thanks to tremendous conservation efforts by the Kiwis we look forward to the day we can say the same about the kea.

We've come to adore the notorious parrot—despite recent headlines that referred to a newborn chick named Nelson as the “ugliest bird in the world.” He may be looks-challenged now, but he'll eventually blossom into one beautiful bird. You can enjoy kea antics all over YouTube. We also recommend this fascinating documentary about the kea. Or enjoy some coffee with your keas at Arthur's Pass in New Zealand right now: