And now 9 offbeat, extraordinary things to see and do in California 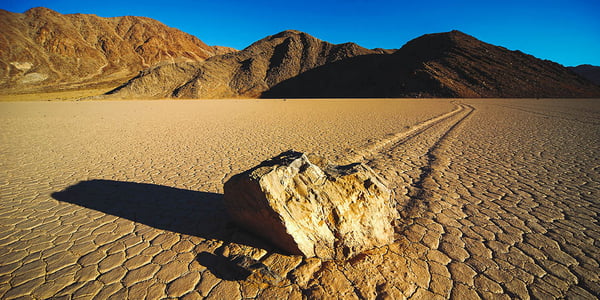 We’ve written about California a lot – and for good reason. It’s a marvelous bit of land. You’ve got the redwoods in the north standing tall next to gorgeous oceanside cliffs. Turn south and both those mammoth trees and the misty monoliths along with them quickly and dramatically turn into gold-sand beaches. Inland, Yosemite casts massive shadows (you’ll immediately fall in love with this wilderness). Then there’s Lake Tahoe nearby where – during any season – the beauty is endless and unerring. Vibrant cultures and communities fringe every last measure of road along the way.

Immensely captivating places like Big Sur provide beatnik refuge. Coastal cities like San Diego, farther south, make you feel like you’re on perpetual spring break. And only a glimmer, a scratch-of-the-surface, is what we’ve offered so far. We know there’s so much more to the Golden State.

This time though, instead of going the more familiar route (like a listing of top places to explore in California), we’re going to give you a full list of the not-so-familiar. Places or things or experiences you may have never even heard of. Have we intrigued you? Are you planning a locum tenens adventure in California? If you answered yes to at least one of those questions, keep reading.

1) The Wave Organ in San Francisco

Back in 1986 a pair of artists, Peter Richards and George Gonzales, collaborated on an acoustic art piece together. It’s called the Wave Organ and it actually produces sounds, activated by waves of course. (It’s said that the sound is so subtle that you must become sensitized to really hear it.) Go check it out. You may just fall in love with the views of the Golden Gate Bridge from here, too.

Search for this place online and you’ll find that its main website may look a little out of date. Don’t let that deter you. It’s spectacular here. The active slogan on said website definitely rings true: Take a Subterranean Journey to the Mediterranean – in the Middle of California. Interestingly enough, the man who built these underground gardens was a Sicilian immigrant named Baldassare Forestiere (what a name, huh?).

If you can stand the heat, this is a most amazing sight. Not simply for its vast playa filled with polygonal mud cracks but also for its sailing stones. These stones, both big and small, baffled scientists for years. Why? These rocks would leave large, long tracks with no seeming explanation as to how they were moving. Scientists later found out that ice flows and strong winter winds were the culprits. 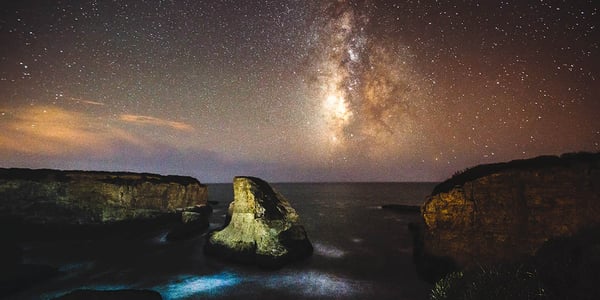 The views you’ll find here are utterly dreamlike. There’s an actual rock that juts out of the water here that resembles a shark fin. You may have never heard of this place yet because it’s located just off the side of the road alongside a small makeshift parking lot. Don’t let that fool you. A short walk from the parking lot, you’ll see unbelievable views. And down below, in addition to the shark fin rock, there’s a large sea cave ripe for exploring (be careful of rising water).

5) The Giant Dipper in Santa Cruz

Hey, once you’re done at Shark Fin Cove, you might as well stop by the Santa Cruz Beach Boardwalk, right? Right? For sure, this place is a better known site but that doesn’t mean it’s not worth visiting still. We don’t think a trip to this section of California would be complete without taking a ride on the iconic Giant Dipper.

You don't often think Tuscan castle when you think of California but for real, there's an "authentically-built, 13th-century Tuscan castle and winery" here. Now the place wasn’t actually built in the 13th century but it does have all the makings of a castle from that time period – even a torture chamber. You’re welcome to visit for a tasting or take a guided tour, or both.

7) The fire fall at Horsetail Fall in Yosemite 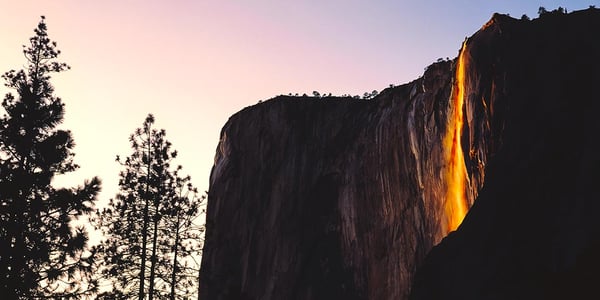 Sadly, you’ll have to wait until next February to view this fiery phenomenon. Specifically, it’s the last two weeks of February when you’ll want to visit. Horsetail Fall itself is seasonal, flowing solely in winter and early spring. But, like we said, if you visit in late February you’ll catch views absolutely unparalleled. The light at sunset during this time of season hits Horsetail just right and reflects so magnificently it looks as if the waterfall is on fire.

While there is a string of seven sea caves in La Jolla, Sunny Jim is the only one that is accessible by land. It wasn’t originally though. Not until a tunnel was dug in 1903 to access the back of Sunny Jim. Believe it or not, the name itself comes from a cartoon character for a cereal that made its debut in the early 20th century. Force Cereal Malt Flakes, look it up. Check out the wonderful cave, too.

A safari in Malibu? We’re sold already. Explore almost all thousand acres of Saddlerock Ranch from the comfort of a "custom-built open-air Safari vehicle." About 30 minutes from Los Angeles you can taste fine local wine all while taking in resplendent scenery and rubbing shoulders with Hollywood elite. Well not exactly. They’re retired now from the big screen…and they’re animals, but they are exotic (zebras, camels, giraffes, etc.)

Now it’s time to plan a trip to California, don’t you think? Again, we’ve only scratched the surface. In fact, here’s a whole list of more obscure, unusual and fascinating places to visit. Go on, check it out. Oh, and if you’re looking to practice in California soon, you can find both short-term and longer-term locum tenens openings here by clicking the button below.