Omaka is not a museum, it's an experience 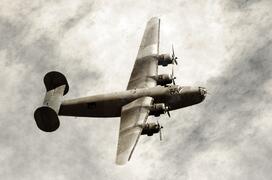 If you think museums are basically dust traps for glass-encased artifacts with a good lot of tedium, think again.

Omaka Aviation Heritage Centre (OAHC) is the farthest thing from monotonous museum fare you'll find in New Zealand and we can explain why in just three words: Sir Peter Jackson. Part of the OAHC collection belongs to the Lord of the Rings creative genius himself, plus the self-proclaimed aviation geek brought his filmmakers’ dramatic sensibility to the place. In short, it's much more than a museum - it's an experience.

Joined by WingNut Films and WETA Workshop, at least 30 of Jackson’s set designers and workers were at the site at one point, bringing human stories from WW1 to life in re-enactments of daring (and disaster) that look like scenes right out of a movie. Some show real flyable aircraft in context, while other scenes recreate actual incidents with photos. Rare memorabilia ranging from personal items belonging to the famous Red Baron himself to beautifully crafted ‘trench art’ add to the drama. In fact, the memorabilia is worthy of any national collection.

Take the room dedicated entirely to Baron Manfred von Richthofen. At other museums, you might see some photos of a red plane or perhaps a replica of a plane suspended from rafters. Here, Jackson and his team have created the death scene: The Red Baron, shot through the heart, lying under the badly damaged plane as Australian soldiers (who apparently reached the scene first) engage in the manic exercise of souvenir gathering. One man is even taking off the Baron's boots. You can see the emotions on the faces of the models and the adrenaline in their actions; every face and every movement is convincingly realistic.

In one display, a nurse waits in a jeep buried deep in the mud as a crew carries a wounded British pilot from his plane to her waiting ambulance; her apron is even muddied. There’s also a visual depiction of one of New Zealand's great heroes, Lieutenant Keith Logan 'Grid' Caldwell. When Grid's plane was hit by enemy fire and he didn’t have a parachute, he climbed out onto the wing and jumped from the aircraft just before it landed. Miraculously, he survived.

Take in the drama and reality at Omaka and you won’t find it surprising that Jackson owns an aircraft restoration and manufacturing company called
The Vintage Aviator. He’s also the chairman of the Omaka Aviation Heritage Trust, which hosts a spectacular biennial air show. While you’re visiting the centre, ask to have your tour guided by “Bunty” - a.k.a. Harcourt Bunt - a New Zealander who flew Spitfires during World War II; he loves the museum and would happily guide
people around there every day of the year for the rest of his life.

OAHC is not only the largest private collection of World War I aircraft in the world, it’s a tribute to the beginning of the airplane and the swift harnessing of the invention into sophisticated machines. You don’t have to be an aviation buff to enjoy it, either. Across the ditch, the Sydney Morning Herald hailed it as the “best museum in the world”. You’ll find OAHC just outside of Blenheim in New Zealand’s famed Marlborough wine region and - whether or not you deem it to be the best museum in the world - it’s an experience that’s blowing the region’s famous wine out of the water.

Here's a 7-minute video that really brings the displays at Omaka to life, but visit in person while you locum - you'll be glad you did! For directions and more details about visiting the museum click here.

Photos courtesy of the OAHC and Jim Tannock, Copyright 2006.