Peter Bush, Hard on the Heels of the All Blacks 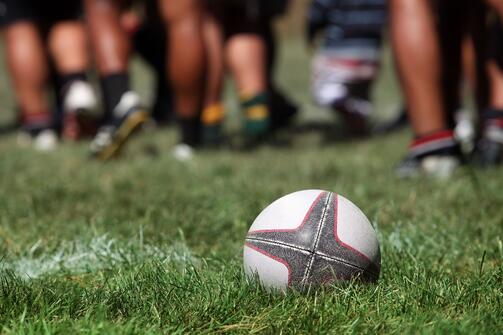 Photojournalist Peter Bush shot his first rugby match for the New Zealand Herald in 1949 and he’ll be
covering the Rugby World Cup this year. Not bad for a man who turned 80 late last year.

Then again, “Bushy” is known for running up and down the sidelines during games, trying to get the best shots - always with sweat rolling off his face. Bush himself says photographing the All Blacks was "a total workout". He says he often donned football boots and chased the players from the sidelines to get the crucial shot – a proximity to the action that is now impossible in the era of professional rugby. But in the era before television, his wired photographs of far-off matches were some of the first images to be seen by local fans.

"In the early years, there would only be three or four photographers at a test match in New Zealand," he said. "There was no television. It was our world."

When he started, darkrooms were essential, but today photographers have a card that can hold 500 images.
"I used to go to a game with four rolls of film with 30 shots on each," Bush said. "I used to try and hold a few shots back in case they scored near the end of the game."

Bush’s lens has captured hundreds of matches and historic moments, both at home and overseas. He’s also had privileged access to the All Black teams, both on and off the field. His photographs range from controversial (one locker-room shot had the Canterbury team banning him for five years) to humorous and dramatic behind-the-scenes moments that feature All Blacks legends including Sir Brian Lochore, Bob Scott and Sir Wilson Whineray to Graham Mourie, Jonah Lomu and Sid Going - not to mention star players from other rugby nations.

In fact, Bush was honored by the New Zealand Rugby Union (NZRU) earlier this year with a NEW gold roving photographers’ bib for his 80th birthday (a roving bib gives a very limited number of photographers access to all portions of the sidelines at rugby matches). Citing his contributions to the game, his number one bib was framed for him and retired from future service.

As part of RWC2011 and the REAL Festival, a national touring exhibition by the acclaimed photojournalist, Hard on the Heels - Capturing the All Blacks, is also taking place at venues throughout New Zealand. Thousands of Bush's photos (which he took over a span of 60 years) have been whittled down to 100, from the first test he shot for the New Zealand Herald – New Zealand versus Australia at Eden Park in 1949 to the All Blacks celebrating their 2004 victory over France in Paris.

Marcus Boroughs, director of Aratoi where the exhibition was launched, says Hard on the Heels is a “goldmine of memories and great moments,” calling Bush a “national treasure.”

Bush captured this photo in 1972 of what he calls a “stoic band of brothers” going onto the field, with a soldier - a highly trained sharpshooter - on the side. Why were armed troopers at an All Blacks game? It was in Belfast, Northern Ireland in the years of the “troubles”. Led by their young captain, Ian Kirkpatrick, the All Blacks filed past the British sharpshooters to a game that was running on “high voltage” before anyone put a foot near the ground. “It was a dangerous, dangerous place,” says Bush. “Before this game, a threat had been made that an attempt would be made to shoot a player on either side and bring the world’s focus to what was then a war-torn province.” The game went off without a hitch, but Bush says perhaps the longest day, and certainly one of the most nerve racking days, that he’d spent covering rugby worldwide.

Believe it or not, however, Bush’s favorite image is not of the action in a grand stadium. In fact, there’s not a rugby ball in sight: the shot is of young halfback (Andrew Donald) walking with an old French woman down a muddy country lane just outside of Toulouse on the All Blacks’ tour of France in 1981. "She looked as though she had stepped out of the pages of Hansel and Gretel stories. The cows followed her.”

About the All Blacks World Cup chances this year - nearly 63 years after he covered his first match vs. the Wallabies - Bush says they have a good chance of winning provided the referees did not have too much of a say.

Bush himself recounts some of his favorite experiences in a video presentation that accompanies the Hard on the Heels exhibit, and you can watch a shortened (28-minute) version of it right here.

Stories from Peter Bush - All Blacks Photographer from Dave Allen on Vimeo.