"You may lose your house, your wife and other treasures; but of your moko, you cannot be deprived except by death. It will be your ornament and companion until your last day." - Māori Netana Whakaari of Waimana 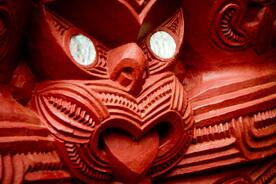 The ancient art of tā moko, which seemed destined for oblivion, is again a declaration of native Māori identity and dignity—and these intricate facial tattoos are much more than decoration.

Once a sign of distinction reserved for those who were the most noble and accomplished, moko actually served

as an individual’s legal identity: During the 1800's, whenever one tribal chief named Te Pehi Kupe (also known as Tupai Cupa) was required to sign his name to a European document, he painstakingly drew his entire facial design. (Note this drawn-from-life portrait of the chief and a copy of one of his "signatures" from the 1820s.) Beyond identification and decoration, tā moko told a rich history of a person’s accomplishments and ancestry.

The twists, turns and spirals of the inked designs have both fascinated and frightened outsiders. It’s said that curiosity seekers during the 19th century traded gunpowder with the Māori for the tattooed heads of their dead warriors. The designs also brought scorn from foreigners who viewed them as primitive.

Today, the sacred swirls and curvilinear designs adorn foreign celebrities like British pop star Robbie Williams and boxer Mike Tyson, and Māori are vigorously defending their claim over motifs they feel are being exploited.
Dr. Ngahuia Te Awekotuku, a Professor of Psychology at Waikato University, says: "Tā moko today is much more than a fashion statement - a passing fad - for Māori. It is about who we are, and whom we come from. It is about where we are going, and how we choose to get there. And it is about for always, forever."

Traditional tā moko is distinct from tattoo in that the skin is carved using uhi or chisels rather than punctured needles, leaving the skin with grooves rather than a smooth surface; whereas kirituhi, or “writing on skin” are markings that are simply inspired by Māori design.

Beyond celebrities adorning themselves with kirituhi, misrepresentation of the art form is only too common among international media and popular culture. The stereotypical “fierce” Māori face is repeatedly portrayed without any context. Facial moko is unfairly seen as intimidating, regardless of the wearer’s intentions.

Enter Kiwi artist Serena Giovanna Stevenson and her traveling exhibition called Face Value. Promoting a better understanding of this traditional art form was one of the many reasons Stevenson started this project in 2000. Today, Face Value conveys the universal intimacy of Māori facial moko through six personal stories - expressed through photography and film.

According to the exhibit’s website, the scenes in Face Value are of real people in their homes, familiar spaces, both indoors and outdoors. We experience the sincerity, human impulse and gaze of understanding passing through the eyes of one generation to the next – from grandfather to grandchild, daughter to mother and on and on. The images highlight the strength of human-to-human connection and how the exchange of facial moko is not possible without this deeply personal contact. It’s also about how unity in the world is impossible if we do not celebrate who we are and if we’re confined to judging each other by face value alone. The exhibition compels us to be drawn into the everyday space and profound moments before, during, and after the intensely personal process of tā moko.

The resurgence of the art among Māori has also seen a revival of the use of uhi and an increasing number of practitioners, including women, who are learning the art. But fearing the ancient art could be doomed by the onslaught of Western culture, and concern about the practice of tā moko by non-Māori has also seen the establishment of Te Uhi a Mataora, a group that deals with issues surrounding the art form. If the process is followed properly, moko continues to mean what it has always meant. It is a symbol of Māori integrity, identity and prestige — as well as a reflection of their whakapapa (genealogy) and history.

If you want to learn more about this beautiful and meaningful art form don't miss our previous article: Tā moko: A right of passage for any New Zealand locum tenens, or visit the Māori website for culture, business and tourism. We also recommend the book, Maori Tattooing by H G Robley.

When you get to The Land of the Long White Cloud for your locum assignment, you’ll recognize the moko on the face of any Māori you meet for what it is: an undeniable declaration of who he/she is.