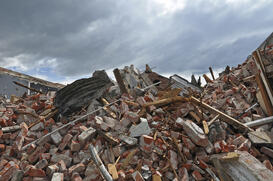 When a massive 7.1-magnitude earthquake hit Christchurch in New Zealand last September,
we were relieved to hear that - despite some structural damage - there were very few injuries and no fatalities. On Tuesday of this week, however, all of that changed. At 12:50 in the afternoon, a 6.3-magnitude quake hit Christchurch, this time taking down buildings
with people trapped inside.

Early calls to our clients, doctors and friends in and around Christchurch brought news that the 100-foot spire of the city’s 103-year-old Anglican cathedral had collapsed (see picture), cell towers were down, the Emergency Department at the city’s main hospital had sustained damage, the city was largely without power and water, and worst of all, there were casualties.

While Tuesday’s quake was a lower magnitude than the one that hit in September, it was shallow and centered just 10 kilometers from the city center; it also happened during daylight hours, when more people are about, so it was far more devastating. Prime Minister, John Key, issued a state of emergency in Christchurch. But long before that, the Kiwis were hard at work to triumph over tragedy.

Rescue teams were dispatched from other cities in New Zealand - and from countries around the world, including the Australia and the U.S.; triage centers were set up to assess and cope with the injured; other South Island city hospitals, including Timaru and Nelson, began making room for earthquake victims; North Island hospitals began receiving Christchurch victims and sent specialist medical teams  to help the devastated city; and more.

Many of the shaken and injured made their way to Darfield - 35 kilometers west of the Christchurch. Cynthia (Cindy) Marks, MD, a Global Medical locum tenens working in the area, responded early to our queries. “Right now we don't really have any communication with the medical community in Christchurch, but we have started seeing people who have made their way to Darfield and beyond,” she says. “The grocery store, petrol station and even our little bank have been cleared out as people head west out of Christchurch. I just hope our pharmacy can keep up with the demand. There is more than the sheer physical devastation - the psychological devastation is going to be far greater, as well.”

Nearly three days later, news of survivors has continued to bring hope to family and friends keeping vigil. Hundreds of people have been pulled out of collapsed buildings, including two women - both named Ann - who were trapped for 24 hours. The two women were found alive in the Pyne Gould Guinness building on Wednesday. Ann Voss - who had called reporters Tuesday night to tell them that she was alive and trapped in the building - suffered several cuts and broken ribs, but is expected to recover. The other was Ann Bodkin. Of her rescue, Christchurch Mayor Bob Parker said, "The sun came out the moment she was removed from the building. It was like God turned on the lights."

Loss of life here is tragic, but there's also news of new life. The number of babies being born spiked following the September quake, and a repeat is underway now. Dr. Melissa Smith, an OG from Hawaii and a locum tenens on assignment with Global Medical, tells us her hospital north of Christchurch is getting an influx of pregnant patients. “The delivery ward is pretty full and it’s getting busier. There’s a lot of work for midwives and more. Women who are further along in their pregnancies have been advised to head to Nelson and stay with family.” One doctor who works at the facility lives in Christchurch and was understandably unable to cover shifts. She asked Dr. Smith to fill in for OB coverage, and naturally Dr. Smith happily agreed.

In true Kiwi fashion, New Zealanders across the country are opening their hearts and homes to those fleeing Christchurch's devastating earthquake. Thousands of phone calls and emails have poured into a temporary phone line, and email address set up to deal with inquiries from Wellingtonian offering free accommodation to the hundreds of people arriving in their capital city from Christchurch. A website, quakemap.net, has also been set up to help find quake refugees accommodation. Napier and Hastings District Councils have set up registries for anyone who wants to offer accommodations to refugees. Numerous Facebook pages ranging from help with accommodations to offers of prayers have sprung up, too.

One Australian doctor who was in Christchurch when the devastating quake struck has been working non-stop helping to treat victims, but warns problems could come in the next few days as fatigue starts to take its toll. Global Medical and our doctors will continue to serve underserviced communities throughout New Zealand, Australia and beyond. If you'd like to volunteer your services in Christchurch, call us at 800.760.3174 or email us at doctors@gmedical.com. We're also posting updates and information on our Facebook page.

Stories of the Christchurch earthquake continue to flow in, so please stay tuned here. Thank you to our doctors, volunteers, and especially to our Kiwi colleagues and friends. Our thoughts are with you.