Forget the milk and cookies: hokey pokey's what it's all about in New Zealand 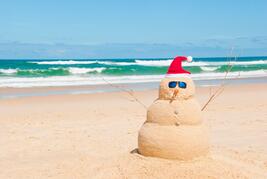 'Twas the night before Christmas;
there wasn't a sound.
Not a possum was stirring;
no-one was around.
We'd left on the table
some tucker and beer;
hoping that Santa Claus
soon would be here.

Clemente Clark Moore? Not quite. Rather, a rollicking Australian version of the well-known Christmas poem by Yvonne Morrison: An Aussie Night Before Christmas.

If you’ve ever wondered how Santa gets around in the warm summer weather in Australia (which is usually blessed with blue skies and temperatures ranging from 77-100°F/25-38°C) wearing that heavy fur-trimmed suit and boots, Morrison has the answer: Why, he pulls on his red shorts and his colorful shirt, chucks the prezzies in the back of his trusty, rusty ute; tells his kelpie to keep guard, then gets goin' like a blue streak aided by eight true blue roos.

The concern about Santa suffering heat stroke has even had some people suggesting that “Swag Man” take over Santa’s franchise in Oz. Wearing a blue singlet (sleeveless shirt), long baggy shorts, and an iconic brown Akubra, Swag Man apparently spends all winter in Uluru with his merry dingoes, then gets in his huge four-wheel drive and sets off The Silly Season at Christmas.

Australia’s sister nation, New Zealand, has a few holiday traditions of its own. Just ask Morrison, who also wrote A Kiwi Night Before Christmas, at a time when she was overseas and knew she wouldn’t get home for Christmas. Seems she was a wee tad nostalgic for home, and no wonder. 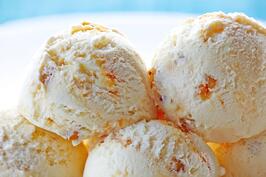 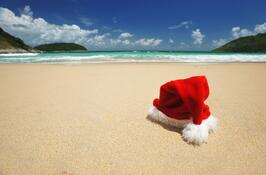 Here, the jingle of sleigh bells is replaced by the familiar chimes of the hokey-pokey truck, which delivers its famous vanilla and sponge-toffee flavored ice cream to children (and adults) in neighborhoods throughout the North and South Islands. Water guns replace snowballs and even jolly old St. Nick gets into the action, prancing about with his reindeer on the beach.

Traditional red, green, and white are replaced here, too. In the Kiwi version, red is for the Pōhutukawa in bloom, green is for lush tropical vegetation offering shade from hot summer sun, and white represents New Zealand’s vast pale sandy beaches. Here, you don't go looking for a Douglas fir to fill a corner of your living room: The Pōhutukawa is the Christmas tree of choice. What’s more, it comes decorated with brilliant crimson blooms that peak in mid-to-late December. Note: we don’t recommend trying to uproot one of these behemoth trees and plant it in your living room, just enjoy them outdoors. Or head to the East Coast and a town called Te Arora, to see the reputedly largest Pōhutukawa tree in the country (it stands nearly 66 feet/20 meters and is 125 feet/38 meters wide). 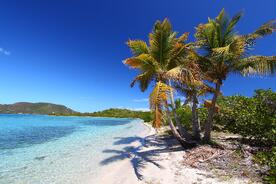 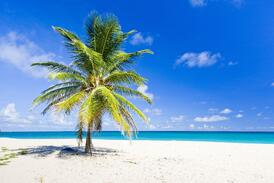 The barbie plays a huge role in holiday festivities and fare in both Australia and New Zealand; a Kiwi inspired menu might also include paua (abalone), scallops, pipi’s (a variety of shellfish) and oysters - all washed down with a glass of New Zealand wine. And don’t forget the national dessert, Pavlova. Colloquially referred to as "pav", this popular dish is an important part of the national cuisine in both places - not to mention a source of contention between the two.

Each nation claims the dessert was created in their country. This fruit and meringue dish was believed to have been created in honor of the Russian ballet dancer, Ánna Pávlova, either during or after one of her tours of the sister countries in the 1920s. Each country says it was their creation. Research leans toward New Zealand, but we’re not taking sides, we’re just enjoying it. 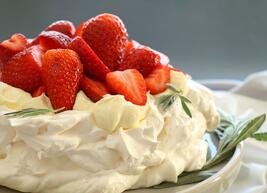 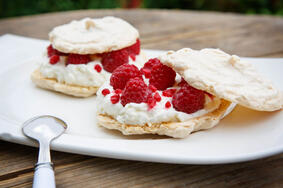 It is a cold hard fact that New Zealand is the first place in the world to ring in the New Year - specifically, the town of Taiohae (or Tai O Hae) in the Chatham Islands. You can track it right here.

If you're making resolutions for the New Year, we suggest you start planning a locum assignment Down Under. And no matter where you’ll be when you ring in 2011, we wish all the best. To our doctors Down Under, enjoy the beach, the barbie and the bonfires. If you're missing the fireplace gatherings, we leave you with this.