Ta moko: A rite of passage for any New Zealand locum tenens

Tattoos have been gaining in popularity nearly worldwide for a number of years now. In fact, the word “tattoo” - in all its iterations and translations - has been among the #1 searched beauty terms on the Internet since 2003.

Little did Captain James Cook know when he coined the word “tattow” in 1769 (the same year he discovered New Zealand), that the tattoo would become all the rage. We say the Māori tribes have always known that “skin is in.”

According to Māori mythology, tattooing (“tā moko”) commenced in the underworld, and their tattoos (“Moko”) are as unique to the wearer as their own fingerprints. 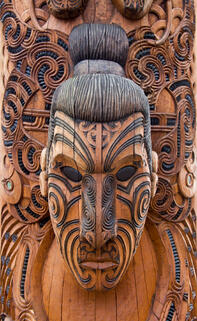 For the Māori people, the moko was much more than decoration; it was a symbol of rank, status, genealogy,
tribal history, and eligibility to marry - not to mention strength, virility, and courage. You think those guys with full sleeves these days are macho? The needle method is child’s play compared to this.

Tā Moko is carved into the skin, making incisions
(deep grooves) with a range of chisels ("uhi") made from bone (usually albatross), which are attached to a handle, then struck with a mallet (check out the video of Ta Mako below).

The “ink” is actually pigment made from the soot of vegetation like Kauri Gum, ngarehu (burnt timbers) or awheto - a caterpillar that mutates into a vegetable found on the floor of most native forests.

Tā moko generally started at puberty. The first moko marked a boy’s transition from childhood to adulthood, and was accompanied by a series of rites and rituals. Moko marked other milestone events in a Māori’s life, but it was also a way to immediately identify a Māori’s position of power and authority. All high-ranking Māori were tattooed, and those who went without tattoos were considered to be without status or worth. 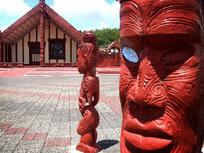 Despite the painful application, moko art is beautiful and incredibly unique. Based on curved shapes and spirals, the designs are curvilinear, with intricate and distinct patterns. The warrior’s face was the most prevalent place for tā moko (the Māori considered the head to be the most sacred part of the body), though they generally also covered the legs and buttocks. Moko craftsmen carefully studied a person's bone structure before commencing his or her art, and full-face tattoos were very time consuming. In fact, a single piece could take months or even years to complete. Fasting was also part of the process - mostly because the face was so swollen they couldn’t eat!

Although moko was also intended to make a warrior more attractive to women, females were also tattooed - though usually only on the lips and chin. And while it’s no surprise that others have come to admire the beauty of tā moko, copying a pattern is very insulting to the Māori culture. Even if it’s done with respect, the Māoris believe copying is nothing short of identity theft.

Tā moko (including the chisel) and many other Māori traditions are now experiencing a revival in New Zealand. While you locum Down Under, don’t miss Rotorua. This heartland of Māori culture is a must-see experience where you can be an eyewitness to the deeply moving expressions of all-things Māori; see legends brought to life through music, art, and dance (like the famous haka); and even witness a little Moko in the making. We don’t expect you’ll come away with a Māori tattoo of your own, but who knows, some people don’t leave their home-away-from home without one…

Watch tā moko in progress in this video: