Call Stradivari for a violin; termites for a didjeridu.

It was with some pride weeks ago, as I watched Jeopardy! (America's Favorite Quiz Show) that my host, Alex Trebek, hit me with the $2,000 question in a category dubbed "Hollow"—and I knew it! See if your wits match mine:

Alex: "This Aboriginal instrument, also called a 'drone pipe,' is traditionally made from a Eucalyptus branch that is hollowed out naturally by termites."

I yelled the answer so loudly I terrified my cats (who were otherwise unimpressed), but for someone who prides themselves on knowing that Australian culture is far more than quotes about dingoes/babies and throwing shrimp on the barbie, it was a nice moment. 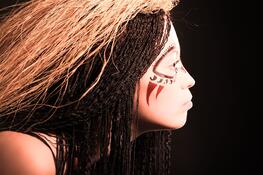 metimes spelled didgeridu or didgeridoo), the Yolngu Aboriginal people of northeast Arnhem Land call it the “yidaki”, and its ancient sound is a call to all people to come together in unity. The didjeridu is also believed to be the world's oldest wind instrument—dating back thousands of years. Harvesting has to be timed precisely to ensure that the wall thickness is just right; and because it takes at least a year for termites to hollow out the Eucalyptus tree, a didjeridu is indeed a feat of Mother Nature.

Have you ever heard a didjeridu? Its deep drone is not something you'll soon forget. The sonorous tones are hauntingly beautiful. In fact, the term didjeridu is believed to be an onomatopoeia developed by Westerners to describe the sound the instrument makes, not a name of indigenous origin.

A finished didjeridu is around four-to-five feet long and two or more inches in internal diameter. Its mouthpiece is usually made of beeswax or hardened gum, and the player blows into the instrument trumpet-style. Traditionally, the didjeridu is played in ceremonial dances called Corroborees, accompanied by clap sticks or boomerangs clapped together; players also tap out rhythms on their didjeridu with their fingers or sticks.

Still in widespread use today—both in Australia and around the world—the didjeridu is often painted in remarkable colors and designs. The instruments are musically soulful works of art.

One of our fine locum doctors, Raymond Lewandowski III, MD, took to the didjeridu while he was Down Under. Another doctor who did clinical work for an Aboriginal community, David Stoltze, MD, befriended the local medicine man who took him on a journey to carve his first didjeridu.

Why don't you go to Australia for a lesson, or better yet, a performance? While you're there, don’t miss the
annual Garma Festival, to be held in September this year. Garma is one of Australia’s most significant Indigenous exchange events and attracts Yolngu people and neighboring clan groups from northeast Arnhem Land along
with tourists, locals and locums.