Only one word can describe New Zealand and that word is...

Coast to coast, north to south, island to island, New Zealand has it made. Somehow, perfect boundaries have been set; the most ideal lines have been drawn. Everyone who lives here has an ocean of fascinating country and culture that’s unparalleled. So many people call this brilliant land home yet so many don’t get to explore its vast expanse unflinchingly. Shocking, I know. Still, many more than that have never visited at all. They’ve never stepped foot on this volcanic, beachy, glacial, rainforesty country. It’s time that changes. It’s time for those who haven’t been to make their way. In fact, to do whatever they must to make their way. Unspoiled scenery is waiting. Right along with those “this is the way life should be” epiphanies.

Few words exist to describe New Zealand with due respect. I can only think of one off the top of my head that describes it perfectly. It’s a word that won’t leave your mind while you’re here. Literally—not a peep will leave your lips. Because you’ll be so stricken with awe, so overcome by rolling waves of soft earth, so exhausted mentally from the idyllic explosion happening before your eyes that you won’t be able to garner enough mental capacity to make those choice syllables move from mind to mouth. New Zealand is simply and utterly…surreal. And here’s the most surreal out of all the surreal in the Land of the Long White Cloud.

Lauded short-story writer and novelist Rudyard Kipling stepped foot here once or twice. Every time he left, he swore Milford Sound worthy of being “the eighth wonder of the world.” Not much more can be said. Take his word for it. 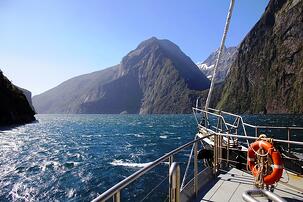 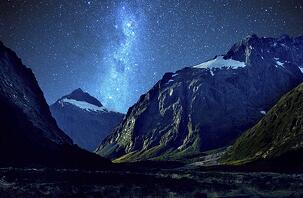 Don’t miss Rotorua. Here, the earth churns and the air’s thick with mist. And all around are green pools, hot springs and mud pools with vast mountains vaulting in the distance. One of our doctors—Catherine Dalton, MD, went and was paralyzed with awe: "The land was strangely beautiful and the people were beautifully strange. Geysers erupted all over, and the Maori danced their traditional dances."

After a hike, heli-hike, or ice-climb on the famed Franz Josef, take a relaxing dip in the Glacier Hot Pools. They’re located in a lush rainforest not far off. Legend has it these hot waters are fed by the frozen tears of a goddess pining for her lost love. (We didn't say it wasn't gushy, we just said it was a legend.) 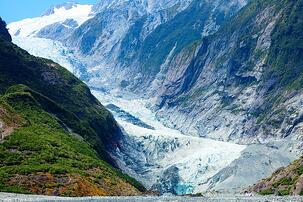 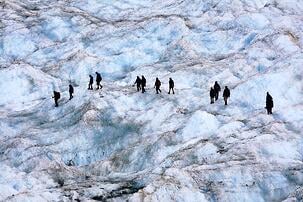 The Catlins—an area on the southeastern coast of the South Island—is home to some rare animals. From the shy Hector's dolphin to the very un-shy Hooker's sea lion; you're sure to see some local fauna. This sweep of land is also home to endless beaches, coastal cliffs, rainforests, coves, waterfalls and sprawling farmland. It’s often sold as “off the beaten track” and it’s true. Lucky for you, many people overlook the beauty of this place. 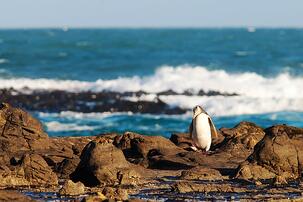 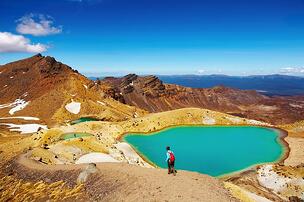 William LeMaire, MD—who’s worked for us in New Zealand—sums it up perfectly: “The best part of Coromandel Peninsula was Hot Water Beach. With a borrowed shovel, we dug a hole in the sand at low tide...the hole then fills up with hot water (from underground geothermal activity) and coupled with the cold ocean water, it becomes a great natural spa to soak in and enjoy a glass of wine as you watch the tide roll in again.” Well, that sounds nothing short of lovely.

Just south of the South Island, Stewart is the third largest island of New Zealand. Its far-south position makes it an ideal spot for seeing the Aurora Australis (the Southern Lights). In fact, the island's Maori name—Rakiura—means "the Land of Glowing Skies." People flock here for many reasons. Not just for the above-mentioned breathtaking view. This island, over 85% of which is a national park, gives prime glimpses of rare birds like the kiwi. 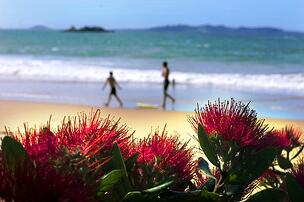 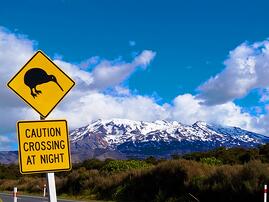 You’ll remember the sight of Rangitoto Island—a volcanic cone just off Auckland shores—for years to come. At sunset everything’s falling. Like Rangitoto is pulling down the sun itself. The surrounding sky looks like a wispy porcelain map beautifully stained with dark orange flames. That’s just the view from Auckland. Wait ‘til you get on the island. The view from there is just as magnificent. Plus, there are black lava caves to explore and much hiking to be done. And it’s all in the midst of the world’s largest pohutukawa forest.

Summer is drawing to a close in the Northern Hemisphere, the days are getting shorter...

That heralds more light for New Zealanders at the other end of the world. Say yes to an invincible, unending summer in the Land of the Long White Cloud with a locum tenens assignment. Learn more about our current opportunities for physicians. Meanwhile, watch this short video that wraps New Zealand up in a shiny, impeccable package.