We're in a Missouri state of mind 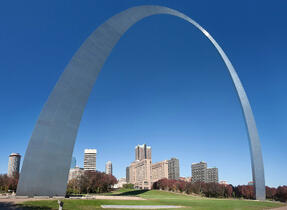 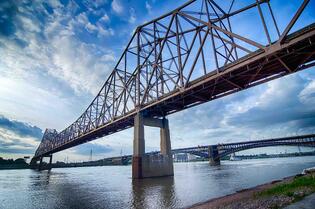 Two U.S. states share a border with eight others—can you name which two? If you said Tennessee, you’re right. While the Volunteer state is one of our favorite places, we’re in a Missouri (the second) state of mind.

Yes, the “Show-Me State”—and make no mistake the Missouri state nickname is no misnomer. The Gateway Arch in St. Louis is one of the most popular symbols in America, not to mention the tallest US national monument; Lake of the Ozarks has more shoreline than the coast of California (nearly 1,150 miles/1,850 kilometers); and beer history was made here in 1861 when Eberhard Anheuser's daughter married Adolphus Busch.

What’s brewing in Missouri now? We think the state got a good start when Samuel Clemens a.k.a. Mark Twain was born here in Hannibal, and today you can visit his boyhood home, explore the eponymous cave and float down the Mississippi on a riverboat. It’s true that Twain learned to pilot a riverboat when he was in his early 20s. He even made a decent living at it until the Civil War broke out. 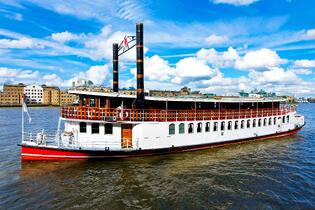 Speaking of rivers, the mighty Missouri spans the state and there’s a bike path that stretches nearly as far—the Katy Trail. Nearly 238 miles/383 kilometers long, you can bike it for several days or simply take a leisurely stroll. When the railroad ceased operation on the route in 1986, the Missouri Department of Natural Resources acquired the right of way for the Katy, making it the longest rails-to-trails project in the U.S. Enjoy the peace and quiet of the beautiful landscape across river bluffs and through farmland. You’ll discover bed & breakfasts, wineries and history as you bike, walk and run the trail.

You’ll discover another Missouri spot for great outdoor adventures in Ozark National Park—the first national park area to protect a wild river system. The rolling, forested landscape around Alley Spring is where two of America's most beautiful spring-fed rivers combine to make up the Ozark National Scenic Riverways. Plus, Alley Mill is about as picturesque as the Midwest gets. 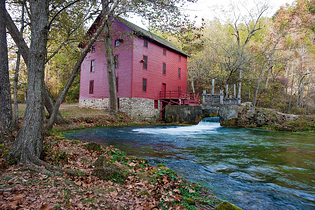 Care for a glass of Missouri wine? Before prohibition wiped them out, Stone Hill Winery in Hermann was the third largest winery in the world. Wine is on the rise again in the state. In fact, you’ll find five wine trails. Surprisingly, craft beers are taking off here, too - right in the hometown of Anheuser-Busch. Locals have long remained loyal to the hometown company, but InBev (an international beer company) purchased it in 2008 and suddenly the city’s craft brew options began expanding. Some two dozen competitors have appeared in the city and surrounding area, and The New York Times has some great recommendations here.

Of course you’ve all heard of Branson, but did you know they have more theatre seats than Broadway? This part of Missouri doesn’t just accommodate people who want to be entertained with breakfast, lunch and dinner shows, though. If you love to fish or explore mountains, streams and caves, Branson is a dream.

Finally, if you're up for some real wild west adventure you'll get it in Missouri. St. Joseph is where the Pony Express started and Jesse James ended. The town’s website claims it’s “where the west officially started getting wild” and over 50 buildings are on the National Register of Historic Places. We have it on good authority that you will find a squad of Chiefs here, too: the Kansas City football team holds their training camp in St. Jo’s every year.

Missouri loves company, folks, and we have jobs all over the Show-Me State. Take a ride along the Katy Trail now and be sure to put Missouri on your "star-spangled" bucket list.