If you’re a fan of "it", there’s a tour for "it" in New Zealand: fly fishing, rugby, surfing, cooking, wine tasting, hiking/tramping, Lord of the Rings, more rugby, and on and on. In fact, there’s so much to see and do as you tour this exquisite country that we tend to forget some of the “downtime” pursuits. One of our own favorites is reading, and we're not alone—Kiwis are passionate about books.

New Zealand’s media website claims more bookshops per capita than any other country, which amounts to one for every 7,500 people—not bad for a country whose first book wasn’t printed until 1830. While oral story-telling underpinned traditional Māori culture, capturing memories with the written word was a tad slower.

Well-read settlers in the 1840s often complained that colonial New Zealand was a cultural desert, despite numerous public lending libraries (like Wrigglesworth's in Wellington and Chapman's in Auckland). But then came the bookshops. Booklovers
in Wellington made a beeline for the Old Identity Book Shop in Thorndon. The eccentric Robert Holt Carpenter opened the shop in the early 1850s to trade used books, but he also imported and sold new volumes. His shop, he claimed, was patronized by “the cleverest men and prettiest women in the Southern Hemisphere.”

Roy Parsons opened his first bookshop in Wellington in 1947 and the store still thrives. Coincidentally, the first really stylish coffee shop to open in Wellington (introduced by Harry Seresin) was situated on the balcony above Parson’s bookshop: proof that coffee and a good book are ideal companions.

Kiwi crime novelists also have a strong following, beginning with Dame Ngaio Marsh. One of the "Queens of Crime" (four female writers who dominated the genre in the Golden Age of the 1920s and 1930s), Marsh is in good company with Dorothy L. Sayers, Margery Allingham and Agatha Christie. 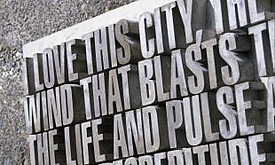 Naturally, you can combine your love of literature with sightseeing in New Zealand, too. The Wellington Writers' Walk, set in one of the world’s loveliest urban land-and-seascapes, combines a stroll along the city’s waterfront with the discovery of sculptural quotations. The Haiku Pathway in the town of Katikati (in the Bay of Plenty) is a meandering river stroll punctuated by boulders engraved with poems. You'll find another literary walk in Dunedin, where a series of brass plaques aim to entertain and enlighten passers-by about the city's literary heritage.

You can still visit Parson’s, just one of the many bookshops that serves voracious Kiwi readers. This October, literary New Zealand will be in the International spotlight as the official guest of honor at the Frankfurt Book Fair—the world’s largest publishing event.